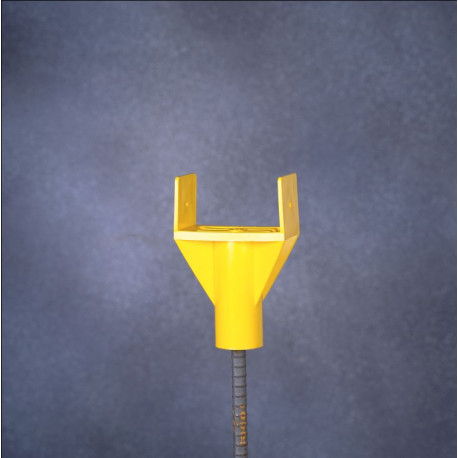 Worried about the possibilities of his co-workers becoming impaled by protruding concrete reinforcement bars, construction safety professional, Michael Carnicle developed the Carnie Cap System. Even though his contractors were using the then-accepted orange caps, injuries were still occurring. Working with input from his site superintendents, Mike came up with the idea to place the 2" × 4"s in two squared U-shaped brackets supported by a tube that would slip over and encase the rebar.

After discussing this concept with his superintendents, he was encouraged to pursue developing a working model. "It was the job superintendents who challenged me to take action," Mike emphasizes. It would take Mike two years to gain a patent and another nine months of testing in five Western states before he felt it was time to put his "Carnie Cap System" ("Carnie" is short for "Carnicle") on the market.

Today, the Carnie Cap System enables contractors to comply with Occupational Safety and Health Administration Standard 29, CFR 1926.701 (b), which requires protruding reinforcing steel be guarded to eliminate the possibility of impalement. The Carnie Cap System also meets the OSHA requirement of withstanding a 250-pound weight dropped from 7 1/2 feet without the rebar breaking through. Now the safe and simple technology Mike Carnicle developed for his own employer is now available for work sites throughout the country. For more information on how the Carnie Cap System works, click on the Product Information.

Be the first to write your review!